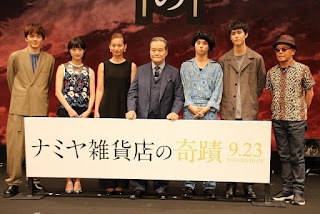 The completion screening event of new movie "Namiya Zakkaten no Kiseki" was held on 18 August which was attended by the director Hiroki Ryuichi and cast members Yamada Ryosuke, Nishida Toshiyuki, Murakami Nijirou, Kanichiro, Hayashi Kento, Kadowaki Mugi and Ono Machiko. The movie will be screened in cinemas from 23 September.

The movie which is based on the same-titled novel by Higashino Keigo that had sold more than 6.5 million copies, is set in modern Japan in the year 2012. Yamada plays the lead character Atsuya who grew up at an orphanage. After doing some evil deeds with his childhood friends Shota and Kohei, he hides at an abandoned house which used to be a general store named Namiya that was known for being a place where people could come to seek advice for their troubles. While at the house, Atsuya finds a letter written by someone 32 years ago in 1980 asking for advice on a problem in the post box and starts to interact with this person through mail on the behalf of the store's owner Namiya Yuji (Nishida). Gradually, the secret behind the store is unravelled through the mail correspondence.

Nishida who worked with Yamada for the first time in this movie, described Yamada as James Dean from the movie "East of Eden", Murakami as Zbigniew Cybulski from the movie "Ashes and Diamonds" and Kanichiro as the Japanese Marlon Brando and Kanichiro's own grandfather Mikuni Rentaro. Although he failed to find a suitable person to compare to Kadowaki and laughed about this, he went on to praise Ono for being very likeable and Hayashi for his good acting skills. Nishida then ended his talk by joking that he said many good things today and even went on to say that there are many people from Fukushima Prefecture so the director who also hails from there, got complimented as well.

On the other hand, Yamada expressed his joy at being able to get interviewed with Nishida for the promotional campaign but reminded the latter that the pamphlet actually cited Hayashi to be comparable to James Dean. Upon hearing this, Nishida said that James Dean had different feels in various movies so he insisted that he was not wrong in comparing Yamada to the Dean in "East of Eden" while Hayashi was more like the Dean in "Rebel without a cause".

Yamada recalled when he read the novel after receiving the movie's offer, he was wondering how they could fit the story into a 2-hour movie but when he read the script, he was impressed by how everything was nicely packaged into the film. As such, he believed that the movie will touch everyone.

The movie will be participating in the Busan International Film Festival's The Window of Asian movies from 12 October and is scheduled to be screened in South Korea, China, Hong Kong, Taiwan, Singapore and Malaysia.