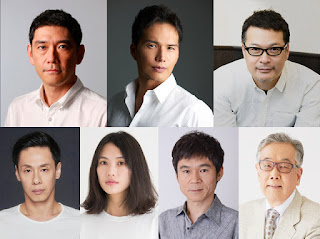 The supporting cast line-up of new WOWOW drama "Chinmoku Houtei" starring Nagasaku Hiromi has been announced. The drama consists of 5 episodes and will begin its run from 24 September in the Sundays 10pm timeslot.

The story which is based on the same-titled novel by Naoki Award-winning writer Sasaki Jou, starts with the discovery of the body of an elderly person living alone in Akabane, Kita Ward of Tokyo who was strangled to death. While conducting investigations into the murder, the police detectives at Akabane Police Station and those from the Metropolitan Police Department get a tip-off from nearby residents that a woman had been visiting the victim's apartment often. It is later found that the woman named Yamamoto Miki (Nagasaku) is the sole owner of a household chores helper business. When the police officers head to Miki's office, they are surprised to see the Saitama Prefectural Police already there to investigate a series of unnatural deaths supposedly linked to her. Through the trial, it is slowly revealed who Miki is and the truth behind these cases starts to unravel as media attention heats up to label her as a serial murderer even before the verdict is out. However, Miki clams up during the trial when it is her turn to testify instead of trying to clear her name.

Here is the supporting cast list and the characters who they will play:

- Takamizawa Hiroshi (Ichihara Hayato): Miki;s boyfriend
- Yatabe Kan (Tanaka Tetsushi): Miki's lawyer who volunteers to take on her case
- Imuro Shinji (Sugimoto Tetta): The police detective at Akabane Police Station who is in charge of investigating the case
- Torigai Tatsuya (Ookura Koji): A police detective who is the buddy of Imuro
- Nishimura Atsuko (Usuda Asami): A newbie detective at Akabane Police Station
- Takai Yousuke (Komoto Masahiro): A TV station director who wants to make use of the case to achieve high ratings for his programme
- Baba Koutaro (Kitamura Soichiro): The wealthy elderly man who was found dead in his house at Akabane

Other co-stars also include Fujimoto Izumi and Kaneda Akio.