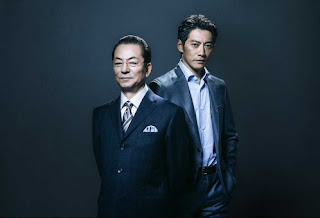 Mizutani Yutaka and Sorimachi Takashi will be back to reprise their roles in the upcoming TV Asahi Autumn 2017 drama "Aibou season16" which will begin its run from October in the Wednesdays 9pm timeslot. The drama series started in 2000 and has an average rating of 16.2% for its 286 episodes aired to date. The last season's (18 episodes) had an average rating of 15.2%. Filming for the new season began in early August. In conjunction with the launch of the latest installment, there will be some special PR videos which will contain footage from the filming, behind-the-scenes and interviews of the cast. These will be made available on the drama's official website from 11 August.

Mizutani commented that he never imagined that the series would reach its 16th season just as how you can never predict what happens in life. As for the reason why the series has lasted this long, he said that he can't speak of a single reason but attributes it to the producers, directors and the viewers who saw various possibilities and potential in Sugishita Ukyo (his character). As such, he is never sick of playing this character as he thinks that there are more things to be uncovered from Ukyo. With regard to working with Sorimachi for the third year, Mizutani said that their characters clashed in season 15 so it will be worth checking out how their relationship will develop in the new installment. On the other hand, Sorimachi expressed his joy about being able to take on the Aibou series again and anticipated that there might be a change between his character's relationship with Ukyo.