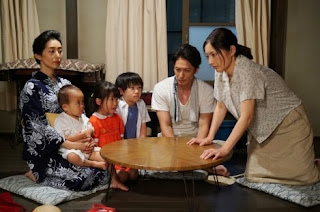 Tamaki Hiroshi will be starring in the new TV Asahi drama SP "Kichiku" (The Demon) based on the same-titled short novel by Matsumoto Seicho which will be shown at 9pm on 24 December. The story based on a true story was published in 1957 and first made into a movie in 1978 starring Ogata Ken, Iwashita Shima and Ogawa Mayumi. It was then remade into a drama by NTV in 2002 starring Beat Takeshi, Kuroki Hitomi and Muroi Shigeru.

Tamaki plays the lead character Takenaka Soukichi who owns a small printing company and works hard with his wife Umeko (Tokiwa Takako). Just when things have finally taken off, Soukichi begins an affair with his lover Kikuyo (Kimura Tae) who he met at a ryotei and they even have three children. When Soukichi's business hits a rough patch and is late in giving Kikuyo her allowance, she barges into his place and dumps their three children on him before disappearing. This marks the start of Soukichi's downward spiral as he grapples with the harsh reality of his circumstances of how to take care of his children who love him wholeheartedly as his wife refuses to accept and bring up the three children.

Tamaki commented that he had to show the conflicts which Soukichi had within him as he steps out of line which is something always depicted in Matsumoto's works. As such, a simple mistake is enough to cause everything he has built up in life to be destroyed in a catastrophic moment. However, the viewers will be able to see the story not just from Soukichi's perspective but also from Umeko and Kikuyo's perspectives.

On the other hand, Tokiwa's character Umeko will transform into a cruel woman upon learning of her husband's betrayal while Kimura who plays a seductive mistress, will get involved in an intense showdown with Umeko when they come face to face. Other co-stars in this drama include Yanagiba Toshiro, Yo Kimiko and Hashizume Isao.

Happy to see Tamaki with a new project! Not too fond of his co-stars but sounds like it'll be an interesting SP. Hope it'll be good!