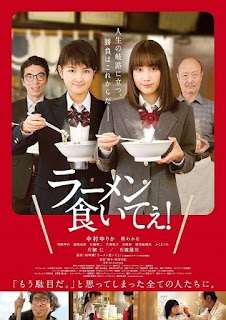 Nakamura Yurika and Aoi Wakana will be starring in the new movie "Ramen Kuitee!" (I want to eat ramen!) which will be shown in cinemas from 3 March 2018. The movie is based on the same-titled Internet manga by Hayashi Akiteru that has achieved more than 1 million page views to date on "Moai" since February 2015 and was directed by newbie Kumagai Yuuki. Co-stars also include Ishibashi Renji and Katagiri Jin.

This heartful story describes how four people find renewed hope in life through their love for ramen. Akahoshi (Katagiri), a cuisine commentator, is lost on the highlands of Kyrgyzstan and about to die when he screams to declare his desire to eat Seiran's ramen before he dies. He musters his last ounce of energy in order to save himself and head towards Seiran. At the same time, Akashi (Ishibashi) the owner of a ramen restaurant, has no desire to continue with the shop after his best partner i.e. his wife passed away. Marie (Nakamura), a senior high school student and the granddaughter of Akashi, is driven to commit suicide due to some groundless rumours about her circulating online and her best friend's betrayal. When Marie survives the suicide, the goal of taking over her grandfather's ramen shop becomes her new purpose in life and she tries to learn the ropes from him along with her buddy Kojima (Aoi) after they reconcile. Co-stars include Takuma Takayuki, Morio Yumi, Mizuhashi Kenji, Kataoka Reiko, Nagaoka Tasuku and Kuroba Mario.

Nakamura commented that filming this movie had been an invaluable experience since she got to learn how to make ramen from scratch and realised how much energy is spent to bring a bowl of ramen to life. As such, this movie will remind people to be grateful for the food they eat and how to be considerate and thoughtful of others. Meanwhile, Aoi who cut her hair by 20cm to fit the image of Kojima, revealed that she had practised draining the water from the ramen so much that her wrist hurt so much due to the weight of the drainer. As the filming was done during cold weather, it was tough on everyone as well but she had enjoyed this experience very much.