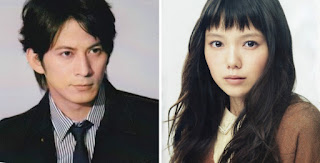 V6's Okada Junichi and Miyazaki Aoi announced their marriage through a joint fax statement to the media on Christmas Eve. It was revealed that the couple had registered their marriage a day earlier and that they meant to make the announcement on Christmas Eve. However, due to a mistake by the post office, the greeting card bearing the announcement from Okada was sent to some fans in V6's official fanclub earlier than expected i.e. on 22 December thus sparking fervent speculation online as to whether the news was true before the official announcement came out today. Miyazaki is said to be not pregnant at the moment and that they are reportedly already staying together. There are no plans for a wedding for the time being while they are expected to be going for their honeymoon next summer. Okada's next public appearance will be during the Johnny's Countdown concert at Tokyo Dome on New Year's Eve where the topic of his marriage is likely to be brought up.

In the joint statement signed off by Okada and Miyazaki, they revealed that they had gotten married on 23 December and asked for the continued support of everyone as they continue working hard in their careers and private lives in a bid to meet everyone's expectations. With Okada's marriage, he becomes the third married member in V6 following Inohara Yoshihiko who married Seto Asaka in 2007 and Nagano Hiroshi who married Shiraishi Miho last year.

With response to his announcement, his fellow Coming Century members i.e. Morita Go and Miyake Ken issued comments to congratulate Okada. Miyake expressed his surprise by saying that he never imagined that such a day would come for their youngest in the group but he was confident that Okada will become an even stronger man who can protect his family and treat them gently at the same time because of the latter's family-oriented personality. Morita offered his congratulations to the couple and wished them everlasting happiness.

Okada and Miyazaki first worked together in the 2008 movie "Kagehinata ni saku" where they played a married couple. Miyazaki married Takaoka Sousuke in 2007 but got divorced 4 years in December 2011. In 2012, Okada and Miyazaki played a married couple again in the 2012 movie "Tenchi Meisatsu" which was said to be what brought them together. They were first caught by the paparazzi in August 2015 for going on a date to a supermarket but had never commented on their relationship and was last reported to have gone to Ise Shrine in December last year while holding hands. Okada's new house in Setagaya Ward, Tokyo, made the news in August this year as it was supposedly designed by a famous architect and cost 500 million yen to build. This was seen as a sign that he and Miyazaki were about to get married in the near future.