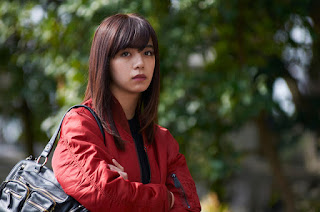 Ikeda Elaiza will be the heroine in the new movie "Cherry Boys" starring Hayashi Kento which will be shown in cinemas from 17 February 2018. The story which is based on the same-titled manga by Koizumi Tomohiro published in 2000, features Hayashi as the lead character Kunimori Shinichi, a 25-year-old virgin and a self-centred and pretentious man. Along with two other virgins of the same age i.e. Yoshimura Tatsuya (Yanagi Shuntaro) and Takasugi Makoto (Maeno Tomoya) who also live in the same suburban city and have their own problems, the three of them who can't stop thinking about women despite their lack of progress in their work and love lives, hatch an outrageous plan to change their destinies.

Ikeda plays the heroine Shaku Fueko who is regarded as the Madonna of the trio and their target in helping them to get out of their virgin status. With regard to participating in this movie, Ikeda expressed her joy and hopes that fans will like this movie. Co-stars also include Ishigaki Yuma, Okayama Amane, Hannya, Yamaya Kasumi, Matsumoto Mei, Kishi Asuka, Baba Ryoma, Fukikoshi Mitsuru and Tateishi Ryoko. The ending theme of the movie titled "GO! GO! Cherry Boy!" will be sung by rock unit MANNISH BOYS formed by Saito Kazuyoshi and Nakamura Tatsuya.