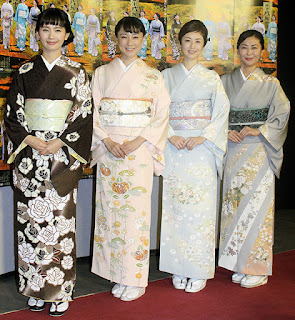 The press conference for new NHK drama series "Heisei Sasameyuki" was held at the TV station's HQ on 25 December which was attended by the cast members Nakayama Miho, Takaoka Saki, Ito Ayumi and Nakamura Yuri who appeared in kimonos. The drama which consists of 4 episodes, will begin its run from 7 January 2018 in the Sundays 10pm timeslot. The story is based on the novel "Sasameyuki" by Tanizaki Junichiro and begins in the spring of the 4th year of the Heisei era i.e. 1992 where the famous Makioka family in Osaka's Senba district, sells off their company which had been around since the Genroku era. The four sisters who had been living a privileged and carefree life so far, must face a new future due to the change in their circumstances. The eldest sister Tsuruko (Nakayama) remembers her past life with pride and tries to live on with this in mind but reality hits hard and reminds her that things have changed. The second sister Sachiko (Takaoka) is dissatisfied with her meek and gentle husband and constantly being troubled by her two younger sisters' antics. The third sister Yukiko (Ito) bears the high hopes of everyone who wants to see her get married but her tendency to focus on people's weak points makes her unable to get hitched despite having gone for more than 20 matchmaking dates so far. Last but not least, the youngest sister Taeko (Nakamura) hates her family's intrusive ways and has had many relationships to date. When a typhoon hits the Kansai region one night, Taeko who gets embroiled into the aftermath, causes huge changes to everyone's lives.


Nakayama expressed her thanks about being the opportunity to take on the role of the eldest daughter in such a classic story and said that Tsuruko is actually more like a mother than an elder sisters. When the filming ended, she had the feeling that it would be nice to continue with it because she had enjoyed it so much. As for Takaoka who last played Nakayama's best friend cum rival in love in the 2016 WOWOW drama "Kenja no Ai", she said that they were like true sisters in this drama and it was so fun to be chatting and laughing together.

Ito revealed that she was unsure whether to watch the 1983 movie version where Yoshinaga Sayuri played the same character as her and finally decided to do so one week before the filming started. She was glad that she did that as it helped her a lot during her filming. As for Nakamura, she happened to read the book written by Takamine Hideko who played the youngest daughter in the 1950 movie version just before she got the offer to play the same role and said that it actually added more pressure to her.

Since the filming was done entirely in Kyoto during the autumn, Nakayama revealed that she didn't have time to go sightseeing since she was making daily commutes between Tokyo and Kyoto so she hoped to be able to go there at her own leisure next time. In contrast, Nakamura said that she was able to go sightseeing and see the autumn leaves but she was surrounded by couples everywhere and wondered how they would feel about seeing her wandering around on her own.