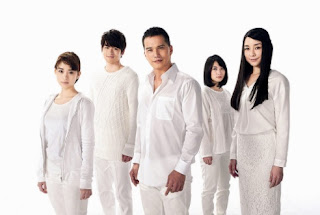 Ichihara Hayato will be starring in the new TV Asahi Winter 2018 drama "Asu no kimi ga motto suki" (I will like tomorrow's you more) which will begin its run from January 2018 in the Saturdays 11.05pm timeslot. This will be his first leading role in a private network drama in 5 years since FujiTV Winter 2013 drama "Karamazov no Kyoudai". The story written by Izawa Mann describes the love story involving 5 men and women with special circumstances and regard being in love as a troublesome thing.

Ichihara plays the lead character Matsuo Ryo who is a landscape designer and has no interest in love and women. He was born in a prestigious Taishu Engeki family but ran away from home after graduating from junior high. Ryo was then taken in by the president of a landscaping company in Tokyo and spends his free time taking photos of insects, plants and flowers with his camera. On his way to finish a planting project for an office building, he meets Kuroda Akane (Ito Ayumi) who works as the president's secretary for a top company and keeps getting involved in relationships with bad men so she has more or less given up on love. Shirosaki Haruhi (Shirasu Jin) is a fresh graduate who looks amiable on the surface but has a hidden side while Tanno Haruka (Morikawa Aoi) is a woman troubled over her sexual identity and works at a construction site in the day and a girls bar at night. Akane's younger sister Azusa (Shida Mirai) gets involved in the messy state of affairs with these men and women who get together and separate repeatedly as they seem unable to stay in a relationship.

Ichihara commented that he usually plays passionate or hot-headed guys so he was very excited about getting this role of a very plain and seemingly emotionless man. As such, he hopes to show a new side to himself through this drama especially since Ryo's interests in motorbikes and photography match his own and even plans to use his own stuff for the filming. As for working with Ito who he has known since they worked in the 2001 movie "Lily Chou-Chou no Subete" and 2006 movie "Chekeraccho!", Ichihara commented that he has known her since he was 13 and felt that she is a very beautiful woman but he finds it so awkward to be acting in a love story with her that he has the urge of running away from the set.

Sources: Yomiuri Hochi / Oricon
Posted by Chiaki at 12:25 AM