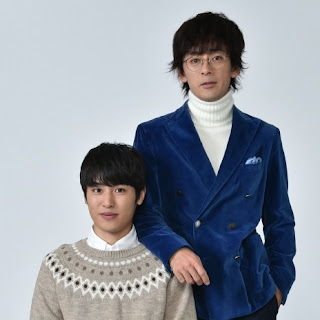 Takito Kenichi and Horii Arata will be starring in the new TV Asahi drama SP "Boku wa ai wo shoumei shiyou to omou" (I think I want to prove love) which will be shown on 28 December at 12.20am. The story is based on the same-titled novel published by Fujisawa Kazuki and was made into a manga in 2016. It describes the concepts of "love engineering" which encompasses methods of how to woo a woman.

Takito plays Nagasawa Keiichi who is a master in love engineering and teaches young people how to apply these methods while Horii will play an unpopular guy Watanabe Masaki who is trying to learn from Nagasawa. This will be the first time that they are working together.

Takito commented that he was wondering if these methods described in the story really work but thought that it was worth a try after all. However, as he is already married with kids, he could only apply such methods when dealing with people who he meets for the first time or children so that they could take a liking to him. As for Horii, he had heard of such wooing methods in the past but never thought that there were so many of them with unique titles describing these actions. He found these methods rather convincing and hopes that the drama will give the same impression to the viewers as well.