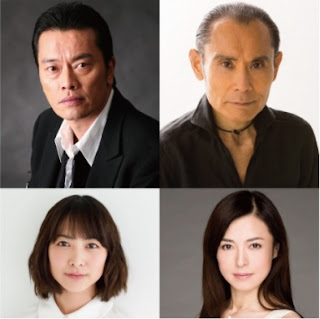 The supporting cast line-up of Tokai TV Winter 2018 drama "Kazoku no Tabiji Kazoku wo korosareta otoko to koroshita otoko" starring Takizawa Hideaki had been announced. The drama which will begin its run from 3 February 2018 in the Saturdays 11.40pm timeslot, is based on the 2003 novel "Chichi to ko no tabiji" by Kosugi Kenji.

Takizawa plays the lead character Asari Yuusuke who is the sole survivor of a family of 3 who were killed 30 years ago and has grown up to become a lawyer working in a small law firm. A young woman Kawamura Reina comes to see him and asks him to become the defense lawyer for a prisoner on death row who has filed a retrial plea. However, Yuusuke realises that this prisoner is actually Yanase Kouzou who was the murderer of his parents and grandfather. Although Yuusuke rejects the request initially, he decides to face the harsh truth head on as he grapples with the pain of being reminded of the past.

Endo Kenichi will play Yanase Kouzou who has been serving a prison sentence over the last 30 years for allegedly killing Yuusuke's parents and grandfather while Tanimura Mitsuki will be playing Kawamura Reina who engages Yuusuke on Yanase's behalf. Kataoka Tsurutaro will play Yuusuke''s boss and a humanitarian lawyer and Yokoyama Megumi will play Reina's mother Kawamura Akane who has led a turbulent life and is trying to find love.

Endo will be playing Yanase from the age of 27 to 57 and commented that he was worried whether he could manage to look like the younger version of Yanase. However, he felt that it would be a very worthwhile experience to play this difficult character and is eager to find out how he and Takizawa would act and interact in this drama ever since they last worked together in the 2002 TBS drama "Taiyo no Kisetsu".