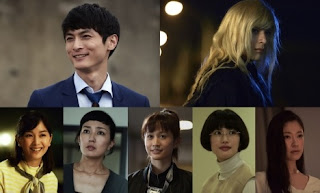 The supporting cast line-up of new WOWOW drama "Bye Bye, Black Bird" starring Koura Kengo and Shirota Yu had been announced. The drama begins its run from 17 February 2018 in the Saturdays 10pm timeslot and will have 6 episodes. The story is based on the same-titled novel by Isaka Kotaro and this will be the first drama adaptation of Isaka's works although there have been movie adaptations like "Golden Slumber", "Juuryoku Piero" and "Grasshopper" in the past.

Koura plays the lead character Hoshino Kazuhiko who dates every woman he manages to attract and is currently dating 5 women at the same time. He is also deep in debt. Wanting to reset his life and get out of debt, he gets attracted to the proposal from a mysterious organisation which will bring him to somewhere on a bus but sets the condition that he has to break up with his 5 girlfriends. While on the journey of doing so, he is accompanied by Mayumi, a 3m-tall and 200kg woman tasked to keep an eye on Hoshino who will be played by Shirota. Hoshino's five girlfriends will be played by Ishibashi Anna, Itaya Yuka, Maeda Atsuko, Usuda Asami and Seki Megumi. Other co-stars include Matsumura Yuuki, Maruyama Tomomi, Okamura Izumi, Saito Yosuke and Agata Morio.

The details about the 5 girlfriends and the episode which they will appear in are as follows:

Ep 1: Hirose Akari - Ishibashi Anna
Just ended an affair with a married man and meets Hoshino by chance at a strawberry picking activity which helps her to get over her misery about her last relationship. Has a cute appearance but is actually strongheaded and unafraid to say anything which comes to mind.

Ep 2: Shimotsuki Risako - Itaya Yuka
A divorcee and single mother who is living with her son Kaito after leaving her cheating husband. Works at a major bank and meets Hoshino when he is a sorry state after his car gets taken away. Starts dating him after Hoshino confides in her about his problems.

Ep 3: Kisaragi Yumi - Maeda Atsuko
A strange woman who aspires to be a solo Cat's Eye and dresses in a weird fashion at night and wanders around with a rope in hand. Gullible and too trusting of others. Starts dating Hoshino after he approaches her on his own.

Ep 4: Kanda Namiko - Usuda Asami
An employee at a taxation agency who graduated from a science faculty. Meets Hoshino while being on the drip at the otorhinology department and he happens to be lying next to her. Has the habit of thinking about things in terms of numbers and using numbers to represent words.

Ep 5: Arisu Mutsuko - Seki Megumi
An actress who meets Hoshino during the filming of a CM and his longest-lasting girlfriend. Has a manager who behaves like a cyborg and turns down Mayumi's demand to break up with Hoshino flatly.