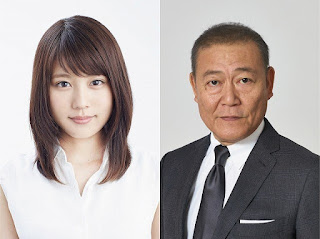 Arimura Kasumi and Kunimura Jun will be starring in the latest installment of the "RAILWAYS" movie series titled "Kazoku Iro" (Family Colour) which will be shown next year. The movie series features people in the suburbs whose lives are linked to the railways. To date, there were 2 movies i.e. "RAILWAYS 49-sai de densha no untenshi ni natta otoko no monogatari" starring Nakai Kiichi which was shown in May 2010 and "RAILWAYS Ai wo tsutaerarenai otonatachi e" starring Miura Tomokazu which was shown in December 2011.

The third installment to be directed by Yoshida Yasuhiro will talk about making a new start in life where Arimura plays the 25-year-old lead character Akira who lives with her husband Shuhei and his son from a previous marriage named Shunya. All of a sudden, her happy life is shattered when Shuhei passes away and she becomes a single mother to her stepson. While visiting her father-in-law Setsuo (Kunimura) in Kagoshima, Akira asks him if they can stay with him since she has no more reason to return to Tokyo even though he is unsure how to interact with them as he has not met them before. Coupled with the fact that her stepson loves trains, Akira works hard to become a train driver for Hisatsu Orange Railway just like Setsuo. Although the three of them are not related by blood, they try to find a way to become a new type of family and adapt to one another.

Arimura who will be playing the series' first female train driver, commented that she also has to play a single mother which she has no experience as well but hopes to be able to convey her character's hard work and feelings with the help of the cast and staff. As for Kunimura, he said that it has been a while since he worked with Arimura in the 2013 FujiTV drama "Starman Kono hoshi no koi" and went to Kagoshima so he hopes to tap on the power of the onsen and imo shochu there to make this a good movie. The director commented that he hopes to make this movie a new inspiration for a different type of family relations where they are not related by blood and is looking forward to seeing Arimura and Kunimura standing in the driver's room on the train.

Filming will begin in January 2018 and is expected to be wrapped up by February.