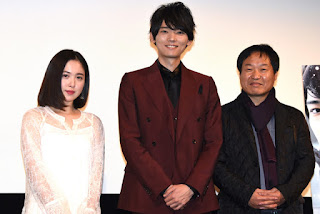 The completion screening event of new movie "Kaze no Iro" was held on 29 November which was attended by the director Kwak Jae-yong and cast members Furukawa Yuuki and  Fujii Takemi. The movie will be released in cinemas from 26 January 2018.

The movie is set is Shiretoko in Hokkaido and Tokyo where two pairs of men and women are embroiled in a mysterious love story. Furukawa plays Ryo, a guy who lives in Tokyo and heads to Hokkaido to look for his girlfriend Yuri (Fujii) who had disappeared 100 days ago. During the journey, he bumps into a magician Ryu (also played by Furukawa) who looks exactly like him and another woman Aya (also played by Fujii) who looks like Yuri. This causes Ryo to be involved in a series of unimaginable incidents as he continues his search for Yuri.

Director Kwak revealed that it took 10 years for the movie to materialise which he attributed to it probably due to him having to wait and meet the leads. He praised them for being very hardworking and having a strong will to take on such difficult roles. In response to the compliments, Furukawa said that he was very pleased to be given a chance to take part in a multinational production like this.

As Furukawa had to do some magic scenes in the movie, he had to undergo training under Mr. Magic but it was usually just minutes before the filming and they rarely had rehearsals to go through the routine first. As such, this was a process which he hardly came across when filming in Japan. In particular, the experience of having to do the escape trick while underwater was very frightening as he wondered what could have happened if he did not manage to get free from the chains. Moreover, the water was freezing cold so he felt that this filming was probably the toughest in his career so far. The director then added that using CG would have cost a lot of money so he had to put Furukawa through the "torture" in order to save some money and apologised for putting him in water many times during the filming which took place about 2 years ago.

As for Fujii, she recalled how nervous she was during the audition for this movie and was glad to have secured the role. She expressed her joy with tears brimming in her eyes that the movie is finally ready to be watched by everyone and was greeted with warm applause from the audience.