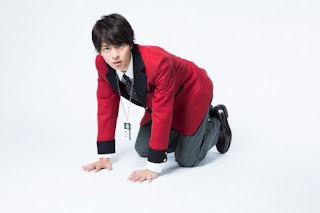 Takasugi Mahiro will be appearing in the new MBS / TBS Winter 2018 drama "Kakeguri" starring Hamabe Minami which will begin its run from January 2018. The drama is based on the same-titled manga by Kawamoto Homura and Naomura Toru currently serialised in "Gan Gan JOKER". The O.A. start dates and timeslots for MBS and TBS will be from 14 Jan at 12.50am on Sundays and from 16 Jan at 1.28am on Tuesdays respectively.

The story is set in the prestigious private school Hyakkaou Gakuen where its students' hierarchy are decided by how well they gamble. The victors will be able to get control over others while the losers will be subjected to harsh treatment and lose their money. Jabara Yumeko (Hamabe) is a new transfer student at Hyakkaou who looks pure and innocent on the surface but is actually someone who relishes in the thrill of taking on risks through gambling. As a result of her sharp observation powers and memory, she disrupts the hierarchy within the school as she overcomes the challengers sent by the student council to defeat her and drives them to destruction.

Takasugi plays a student in Hyakkaou named Suzui Ryota who is meek and doesn't have any talent to speak of. As such, he is at the lowest end of the hierarchy for domestic animals known as Pochi. When Yumeko transfers to the school, Ryota becomes her partner and is saved from his terrible fate in school thanks to her presence. He is also the only person who is not caught by the madness engulfing the students who are obsessed with gambling.

Takasugi commented that this role is a breakthrough for him since he usually plays cool characters but is bullied by his classmates this time. He revealed that at the beginning of the filming, he had been beaten up by his classmates and forced to bark like a dog. Despite so, he found it enjoyable and stimulating to be playing this type of character and hoped to be able to develop Suzui into someone who will leave an impression on the viewers.