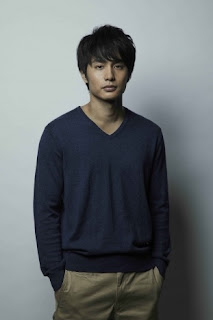 Nakamura Aoi will be starring in the new BS Japan Winter 2018 drama "Inochi Urimasu" (I sell my life) which will begin its run from January in the Saturdays 9pm timeslot. The story is based on the same-titled novel by the late Mishima Yukio which was republished again last year, achieved sales of 260,000 copies and is very popular among those from their 30s to 50s.


Nakamura plays the lead character Yamada Hanio who works at an advertising agency and leads a normal life without any issues on the surface. One day, he suddenly commits suicide but fails to succeed. This leads him to start a business of selling lives which makes him realise the meaning of life and start having the desire to continue living while dealing with a myriad of strange requests from his clients. Co-stars include Maeda Oushiro who plays a senior high school student Inoue Kaoru staying at Hanio's home, Taguchi Hiromasa who plays Miyamoto, a regular at the cafe Hanio frequents, YOU who plays Kyoko, the master of the cafe and Tanaka Min who plays Kishi Soichiro, an entrepreneur who is Hanio's first client.

Nakamura commented that it was interesting to play his character who is prepared to throw away his life while engaging in the business of selling lives in order to bring happiness to those around him. As such, he was very excited to find out how the story would progress and felt that this drama might be a turning point in his career.