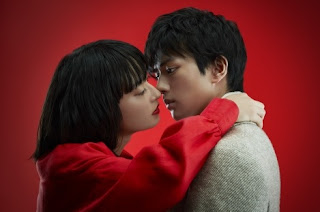 Arata Mackenyu will be appearing in the upcoming NTV Winter 2018 drama "Todome no Kiss" starring Yamazaki Kento and Kadowaki Mugi which will begin its run from January 2018 in the Sundays 10.30pm timeslot. The original story features Yamazaki as Doujima Outarou, the No.1 host in a host club who doesn't believe in love after an incident which happened to him 12 years ago. Since then, he only has eyes for money and power while manipulating women with his good looks and gentle pretense. When he tries to approach a rich man's daughter Namiki Mikoto with ulterior motives, he is stopped by a mysterious woman (Kadowaki) looking pale but with bright red lips who offers a kiss to Outarou. Unexpectedly, this causes Outarou to have breathing difficulties and he dies after experiencing convulsions. When Outarou comes to later, he realises that he has been sent back to 7 days ago and goes through the same period repeatedly due to the mysterious woman who keeps appearing in front of him. The supporting characters include Namiki Takauji who is the elder brother of Mikoto and from a top-notch hotel group and Hasebe Hiroyuki who is the heir of a big name cruise company and in love with Mikoto.

Arata will be playing Namiki Takauji who is out to prevent Outarou from laying his hands on his younger sister. Being the heir to a top hotel group in Japan and the director of a horse-riding club which he manages, Takauji is known to be a gentleman but also has a dark family secret to hide. Arata commented that he is eager to show his acting as Takauji to the viewers and hopes that they will enjoy watching this original story with a lot of interesting elements.