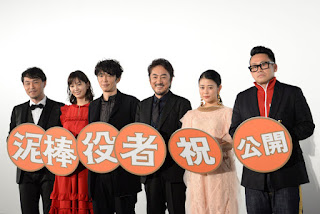 The first-day-screening event of new movie "Dorobo Yakusha" was held at TOHO Cinemas Roppongi Hills on 18 November which was attended by the director Nishida Masafumi and cast members Maruyama Ryuhei, Ichimura Masachika, Yusuke Santa Maria, Ishibashi Anna, Takahata Mitsuki and Miyagawa Daisuke. Maruyama plays the role of Onuki Hajime, a welder who used to be a thief and is living a happy life with his girlfriend now. One day, he happens to meet his former partner in crime Hatakeyama Norio and is forced to break into the residence of a picture book author to steal. Although he makes it successfully into the house, he gets discovered by various people and has to assume different identities such as the houseowner, picture book author and editor in order to prevent being exposed and arrested by the police.


With regard to Maruyama's first solo leading role in a movie, Ichimura praised him for leading everyone with his pure dedication towards his work while Takahata congratulated him on being the lead and expressed her joy about working with him even though they only spent two days together. Ichimura then revealed that even though Takahata was done with her filming, she would pop by to visit them from time to time while dressed like a princess (she was filming "DESTINY Kamakura Monogatari" during that period). Miyagawa then "chided" them for taking the attention away from their movie as Ishibashi said that it was tough to keep her laughter in during the filming.

Ishibashi who replaced Shimizu Fumika at the last minute after the latter quit and retired from showbiz earlier this year, commented that she got to participate in this movie through an unexpected way. In response, Yusuke Santa Maria and Ichimura both said that she was like a saviour to all of them and expressed their gratitude for her taking up this role at such short notice. The director also chipped in to say that even though the production process faced hitches, he was touched by the support of everyone who made this movie materialise.