"Gintama" to have a sequel movie in summer 2018 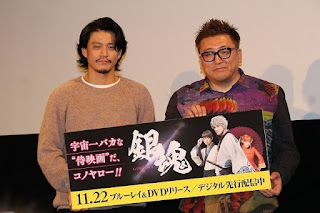 During the DVD and Blu-Ray release event of movie "Gintama" at Akihabara UDX Theatre on 16 November, the director Fukuda Yuichi and lead actor Oguri Shun announced that the sequel to the movie will be released in summer 2018. The first movie achieved box office takings of 3.84 billion yen this summer and the DVD and Blu-Ray versions were released on 22 November. The movie was also shown at 16,000 cinemas in China thus making it the top Japanese real-life adaptation movie to be shown there. As a result of the movie's popularity in China, Oguri revealed that he got a lot of offers from there which made Fukuda comment that it will be interesting to see Oguri in a Chinese movie.


Fukuda revealed that he was told to write the script for the new installment titled "Gintama Part 2" (tentative name) this summer but he couldn't do it and only finished it recently which he felt satisfied about. On the other hand, Oguri asked for lesser appearance time in the sequel because he really didn't want to dye his hair silver again. He revealed that he had to cut all his hair after the filming and hoped to keep his hair long next year. Oguri also joked that he might not be the lead in the sequel which led Fukuda to join in and suggest that Muro Tsuyoshi can be the new Gin-chan. Nonetheless, Fukuda said that he might be able to reveal more details about the sequel during the Jump Fest on 16 December.