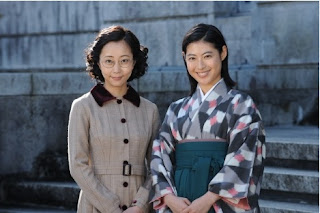 
Mihoko loved singing when she was a child and entered the Takarazuka when she was 13. However, she didn't do very well at first. Despite so, she became a phenomenal star in playing the male characters and left the troupe at the peak of her popularity. She worked together with Tokiko using the name Koshiji Fubuki and produced many hit cover songs such as "Hymne à l'amour" by Edith Piaf which earned her the title of Japan's Chanson Queen. On the other hand, Tokiko was a big fan of the Takarazuka due to her mother's influence and a regular contributor to the troupe's magazine "Kageki". She was then scouted to join the troupe's literary art department because of her literary talent and wrote the Japanese lyrics for Koshiji's cover of "Hymne à l'amour" as well as hit songs for other artists.

As there will be many scenes featuring Koshiji's singing, Takimoto was selected to play this role as she is the vocalist of girls' band LAGOON and has extensive experience in musicals. Takimoto commented that she feels the difficulty of playing someone who existed in real life but hopes to convey the life of Koshiji especially how she lived freely and joyfully in the drama. As for the singing scenes, she pledged to perform her best and convey the emotions Koshiji had in her performances.

As for Kinami, she revealed that she was also a fan of the Takarazuka since she was a child and loved the "Kageki" magazine as well so it was a dream come true for her to play Tokiko. Although she had worked with Takimoto in the NHK morning drama "Teppan" before, she didn't have much interaction with her because her character who was the heroine's mother passed away very early in the story so Kinami only appeared in the flashback scenes. As such, it was great to be able to work closely with Takimoto this time and she hopes that they would be able to become buddies through this drama.

Other co-stars in this drama include child actor Iwabuchi Misako who plays the childhood version of Koshiji as well as Ichikawa Yui, Omi Yoshinori, Hamada Mari, Hara Hideko and Miyazaki Yoshiko.