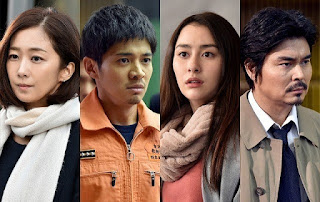 The supporting cast line-up of TBS New Year drama SP "Tochou Bakuha!" starring Hasegawa Hiroki had been announced. The drama SP which will be shown at 9pm on 2 January 2018, also features Kikkawa Koji, Watabe Atsuro, Terajima Shinobu and Lily Frankie in its cast and is based on the same-titled novel published by Takashima Tetsuo in 2001 and describes a terror incident which happens in Tokyo.

On Christmas Eve 2017, a large explosion rips through Shinjuku as the Tokyo Metropolitan Government building is blown up by terrorists. The visitors at its observatory are then taken as hostages by the terrorists responsible for the attack. Former Self-Defense Forces officer Hongo Yuji (Hasegawa) and his friend Vice-Minister of US Department of Defense Cain Takamura (Kikkawa) face off with M (Watabe), the leader of the international terrorist group IF who has abducted Hongo's wife and daughter. Hongo and Takamura infiltrate into the government building in a bid to resolve this incident as Ooike Yukiko (Terajima), the Tokyo Governor and Mizono Sakutaro (Lily), the Prime Minister oppose their plans to deal with IF which is trying to launch more attacks.

Yuka will be playing Hongo's wife Mayuko who is taken hostage by the terrorists along with a pregnant woman Sakurai Yui played by Hayami Akari. Wada Masato will be playing Ebihara Minoru who is a fireman tasked to help in the rescue operation while Ozawa Yukiyoshi plays Maruyama Naoto who is Hongo's friend and a detective from the Public Security department to investigate the terror cast. Other co-stars include Maiguma Katsuya and child actor Hirasawa Kokoro.