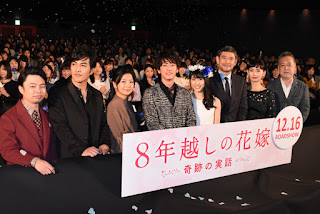 The completion screening event of new movie "Hachinengoshi no Hanayome Kiseki no Jitsuwa" was held at Yurakucho Mullion on 16 November which was attended by the director Zeze Takahisa and cast members Sato Takeru, Tsuchiya Tao, Yakushimaru Hiroko, Sugimoto Tetta, Kitamura Kazuki, Hamano Kenta and Nakamura Yuri. The movie will be shown in cinemas from 16 December.

The movie is based on a true story about Nakahara Takashi and his wife Mai who live in Okayama. At the end of 2006 which was 3 months before the Nakaharas' wedding, Mai was diagnosed with the rare illness anti-NMDA receptor encephalitis which has an occurrence rate of 1 in 3 million people and fell into a coma for an extended period of time. However, Takashi did not give up and continued waiting for Mai to recover. When Mai resumed consciousness, she lost her memories of Takashi who did not give up which led to a miracle happening to them 8 years later when they finally got married in December 2014. The video of their wedding was recorded by the wedding hall's company and uploaded to YouTube in February 2015 thus attracting a lot of attention from the netizens. The Nakaharas' story was also published as a book in July 2015 with the title "Hachinengoshi no Hanayome Kimi no me ga sameta nara". Sato plays the role of Takashi while Tsuchiya plays Mai in this movie.

Before the filming began, Sato and Tsuchiya paid a visit to the Nakaharas. Sato said that he finds it difficult to smile, be it in real life or acting, so he found it really difficult to play Takashi in this movie as the latter is always smiling. On the other hand, Tsuchiya said that she found Mai to be really charismatic, cute and energetic so she hoped that she was able to show these sides of Mai along with her struggle with the illness through her acting.

In line with the movie's theme, the photo of Sato and Tsuchiya taken together 8 years ago were flashed on the screen much to the delight of the fans. Sato explained that his photo was taken when he was 20 and Tsuchiya was 14 at the time when they were acting in the NHK Taiga drama "Ryomaden". Tsuchiya stated that they met for the first time in the dressing room of "Ryomaden" but they never got a chance to act together in that drama until 8 years ago in this movie.

At the end of the event, Sato presented Tsuchiya with a flower crown made of blue roses and diamond lilies which signifies miracles and happy memories respectively and praised her for looking good with that. Tsuchiya also expressed her thanks to Sato for being very considerate and supportive of her like a boxer and a coach as she had to gain and lose weight for the character during the filming.

I saw a clip of the real-life couple, their story was really touching. They were so sweet together too. I hope the film manages to portray well their strong bond and the love they have for each other. The trailer looked good, and Sato Takeru always delivers.

Sadly, I don't think it'll be showing where I am, so I gotta wait, sigh.

It's probably going to be the same here in Singapore. Stories of this nature don't really have a high chance of making it to the cinemas unless they boast a star-studded line-up or the movie is based on some popular manga or novel or they do very well in Japan's box office. I guess it's the same everywhere else, profit is very important to the movie distributors after all and we can't fault them about it.