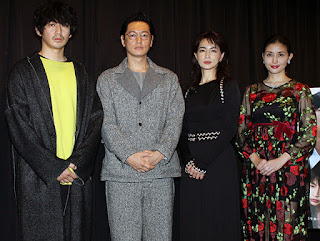 The first-day-screening event of new movie "Hikari" was held at Shinjuku Musshinokan on 26 November which was attended by the director Omori Tatsushi and cast members Iura Arata, Eita, Hasegawa Kyoko and Hashimoto Manami. The movie is based on the theme of violence in daily life and describes how Nobuyuki, a junior high school student who lives on Mihamajima, a remote island in Tokyo, commits a crime when he tries to protect his classmate and girlfriend Mika. On the following day, the island is struck by a huge disaster thus leaving a few survivors including Nobuyuki, Mika, their childhood friend Tasuke and a few others. 25 years on, Tasuke appears again in front of Nobuyuki who is already married and reveals that he has a secret about the latter. Iura will play the 39-year-old Nobuyuki while Eita plays the role of Tasuke. Hasegawa will play Mika who tries to bury her past and survive in showbiz and Hashimoto will play Namiko who is Nobuyuki's wife.


After the screening ended, Iura was glad to see the audience's warm response and expressed his relief about it. He commented that they made this movie in September last year and it was great that the film was finally ready to be watched by everyone. As for Eita who had two movies released earlier from October i.e. "Ringside Story" and "Mix", he commented that this movie was a big favourite of his and he was glad to be able to end his promotional run for his movies this year with this film.

Iura described this movie as a wonderful piece of work which the director had made with the intention of returning to his roots. Eita also spoke of how he and Iura had gone all out in their acting such as how Eita charged towards Iura without holding back as they fought on a grass field. On the other hand, Iura revealed that he actually strangled Eita during the actual filming even though this action wasn't mentioned in the script nor done during the rehearsal. Iura explained that the emotions involved in that scene necessitated such an action so they went ahead with it after the director reluctantly gave his approval. Iura then thanked Eita for going along with the idea and said that this was something he might not have been able to do if his co-star was someone else.

Hasegawa then commented about how this movie is a rarity in today's cinema scene which throws many questions for the audience to think about and gives them different conclusions each time they watch it. As such, she expressed her thanks to the director for making such a movie and allowing her to participate in it. Last but not least, Hashimoto revealed that when she participated in the director's workshop in the past, his advice was that they should watch and read difficult to understand things so as to get better at their acting. Thus, she felt that this movie was precisely as such because it touched on some very complex themes in life and everyone put in their best efforts to make the movie come to life. The director then thanked everyone for coming to watch this movie and said that it's fine if they develop contrasting views about it. He hoped that this would be a film which they could look back on many years down the road.

Thank you for your translations!