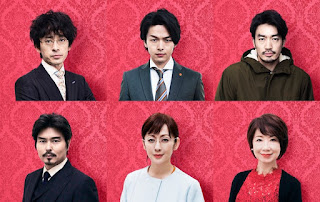 The supporting cast line-up of new Hulu & HBO drama "Miss Sherlock" starring Takeuchi Yuko & Kanjiya Shihori had been announced. To date, there have been many dramas and movies about Sherlock Holmes and John Watson but this will be the first time where the two characters are set as women.  The drama which consists of 8 episodes, will be streamed via Hulu from 27 April 2018 and shown from the same day in 19 countries via HBO Asia.


The story is set in modern day Tokyo from its original setting in London where Sara Shelly Futaba i.e. Miss Sherlock (Takeuchi), a Japanese investigation consultant who was born in the UK, works together with a top-notch surgeon Tachibana Wato (Kanjiya) who has a strong sense of justice to solve a serial murder case. Takito Kenichi will be playing Inspector Remon who wants to make use of Sherlock to get ahead in his career while Nakamura Tomoya will play Sergeant Shibata who is Remon's subordinate and very passionate about his work. Otani Ryohei plays a warzone cameraman Moriya Tooru who has an emotional trauma while Ozawa Yukiyoshi plays Futaba Kento who is Sherlock's elder brother and only family member and works as an information analyst for the Japanese Cabinet. Saito Yuki plays the psychiatrist Irikawa Mariko and Ito Ran plays the widow Hatano Kimie who rents her apartment to Sherlock.