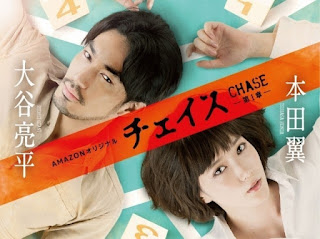 The last episode (Ep 7) of Amazon Prime Video drama "Chase Daiisshou" starring Otani Ryohei and Honda Tsubasa which was supposed to be streamed via the portal from 26 January, has been postponed indefinitely without any prior notice. The media sent a query to Amazon Japan which replied that they were unable to confirm at the moment when Ep 7 will be streamed and that this was going to be the situation for the time being. The drama which began its run from 22 December last year, currently has its 6 episodes already available for viewing on the portal. It is believed that this decision was with regard to the plagiarism scandal which arose at the end of last year.

It was pointed out soon after the first episode's release that the content in the drama bore a close resemblance to that in the non-fiction book by journalist-writer Shimizu Kiyoshi titled "Satsujinhan wa soko ni iru Inpei sareta Kita Kanto renzoku youjo yuukai satsujinjiken". The book which was published in 2016, talks about The Ashikaga Case which was one of the serial murders involving 5 young girls between the age of 4 and 8 who were murdered in two neighbouring cities i.e. Ashikaga City in Tochigi Prefecture and Ota City in Gunma Prefecture. The sloppy investigation, the unknown truths behind the DNA testing and a bid by the authorities to cover up the mistakes led to an innocent man being sentenced for the crime which took place in 1990 before he was finally vindicated in 2010. On the other hand, "Chase" talks about how a freelance journalist (Ootani Ryohei) and TV station's assistant director (Honda Tsubasa) work together to find the truth behind an unresolved serial murder case involving young girls which took place 27 years ago.

Shinchosha released a statement on 28 December stating that they have nothing to do with the drama even though they had received many queries about the similarities between the book and the drama ever since the drama was shown. The publisher also revealed that they had received many offers to date asking to adapt this book for a drama or movie but they had not agreed to any so far in consideration of the feelings of the victims and their family members. Shimizu himself also followed with a message on his Twitter account to say that he has nothing to do with this drama.

The drama's joint producer Shinomiya Takashi posted some tweets on 30 December addressed to Shimizu where he revealed that the intention of making this drama was to draw attention to the unresolved cases in a bid to find out the truth and that he had read Shimizu's book before. However, he admitted that they might have gone overboard in their overzealous attempt to do so and hoped to have the opportunity to speak to Shimizu directly on the matter.

Publisher Shinchosa and journalist-writer Shimizu Kiyoshi then filed a request to Amazon and JokerFilms (the company which made the drama) on 17 January with respect to "CHASE" and asked for the immediate cessation of its streaming on Amazon Prime Video due to the controversy over the drama suspected of being based on Shimizu's non-fiction book and the dramatisation made without his nor the publisher's permission. However, the 6th episode was still released as scheduled on 19 January despite this request.

I feel sorry for the actors and crew, but this is the right decision. You can't allow plagiarism to continue as if nothing has happened (unlike a certain country) and it is only right to stop airing the drama if it is mired in such controversy. I hope this sends a strong warning to those who think they can get away with using other people's work without proper credit.