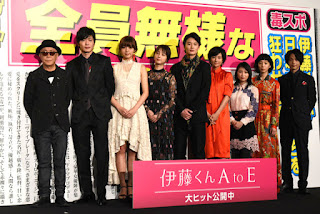 The first-day-screening event of new movie "Itou-kun A to E" was held at TOHO Cinemas Shinjuku on 13 January which was attended by the director Hiroki Ryuichi and cast members Okada Masaki, Kimura Fumino, Sasaki Nozomi, Shida Mirai, Ikeda Elaiza, Kaho, Nakamura Tomoya and Tanaka Kei. As Okada happened to have a sore throat on that day, Kimura called upon everyone to be gentle and understanding towards him.

Okada described his character Itou as someone who may be seen as a despicable jerk but actually has his own principles and way of doing things so he did feel envious of Itou to a certain extent. As for Kimura, she described the characters in the story as very lifelike and realistic so she commented that by seeing how they try hard to move ahead in their own ways, the audience would be able to find hope and meaning in their lives.

As Okada was said to have fully immersed himself into the role of Itou, his co-stars commented on how they came to mix the two of them together. Sasaki said that she was rooting for Kimura when there was a clash between Itou and Kimura's character Rio because she thought that he was too lowly while Shida felt so much "disgust" for Itou/Okada that she wanted to get away from him whenever she saw him. Upon hearing these "complaints", Okada wondered aloud if the event was meant to speak ill of him but Tanaka joined in to explain that Okada is actually far from Itou in real life so they were all impressed by how he had managed to act in such a way that people could see him as Itou.

Email ThisBlogThis!Share to TwitterShare to FacebookShare to Pinterest
Labels: Itou-kun A to E, Movie News