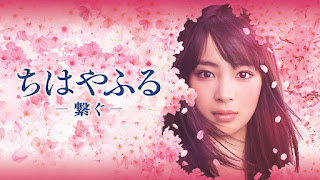 In conjunction with the upcoming release of new movie "Chihayafuru - Musubi -" starring Hirose Suzu, Nomura Shuhei and Arata Mackenyu etc, there will be 5 special drama episodes titled "Chihayafuru  - Tsunagu -" which will be streamed via Hulu from 20 February. The story will be a connection between the previous movie in the series i.e. "Chihayafuru - Shimo no Ku -" and the new movie which is the concluding installment to the series. The second half of each episode will feature behind-the-scenes footage from the new movie as well and a segment titled "Chihayafuru - Manabi -" starring Yuuki Mio and Sano Hayato who play newbie members in the new movie and they will be explaining the basic rules of competitive karuta. On Hulu's website, there will also be a page introducing the signature works of the cast in the movie.