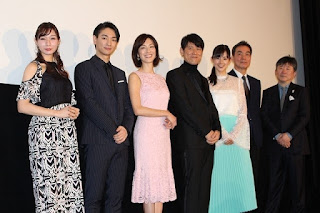 The first-day-screening event of new movie "Midnight Bus" was held at Yurakucho Subaruza on 27 January which was attended by the director Takeshita Masao and cast members Harada Taizo, Yamamoto Mirai Konishi Manami, Nanase Kou, Maikawa Miyako and Nagatsuka Kyozo. The movie which is based on the same-titled novel by Ibuki Yuki, describes the story of Takamiya Toshikazu (Harada) who quit his job in Tokyo and goes back to his hometown in Niigata to be a midnight bus driver. One night, he happens to bump into his ex-wife Kaga Miyuki (Yamamoto) who he had parted ways with 16 years ago when she boards his bus. This marks the start of a journey to restore family ties which had been broken and depicts his interaction with the passengers who he meets during his work. Konishi plays Furui Shiho who is Toshikazu's current girlfriend while Aoi Wakana and Nanase play his daughter Ayana and son Reiji respectively. Nagatsuka Kyozo plays Miyuki's father Yamabe Keizo. Prior to the nationwide release, the movie was first shown in cinemas at Niigata a week ago which achieved more than 10,000 cinema visits thus making it a major hit there.

Harada who starred in the director's debut work "Jump" 13 years ago, commented that everyone from the staff and cast and those who chipped in one way or another had put in their all to make this movie which contains various messages about family and love. As such, he hoped that the audience would be able to feel these after watching the movie. The director also said that it had been a long journey since the movie was planned until it was finally released so it felt like they had been running through a long night before the dawn finally came.

Nagatsuka raised his "doubt" over why Harada was so popular among the women in this movie and cited this as something interesting in this movie which the audience should pay attention to. Harada himself echoed the view and looked at his "current girlfriend" (Konishi) and "ex-wife" (Yamamoto) which he said that it was a nerve-wracking time to be standing between them now.

In order to play the role of a long distance bus driver, Harada also had to take the exam to earn the driving licence for such large vehicles. Although he was scared at first when driving the bus, he became used to it after multiple takes and could pass off as a pro. He also called out to everyone that he will be ready to take on more bus driver roles with this licence and stressed that he can even drive trucks now.