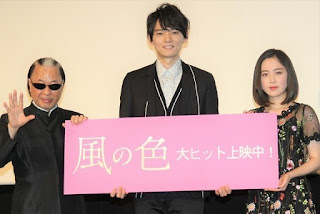 The first-day-screening event of new movie "Kaze no Iro" was held at TOHO Cinemas Nihonbashi on 26 January which was attended by the cast members Furukawa Yuuki and Fujii Takemi as well as the magic tricks director Mr. Maric. The movie is set in Shiretoko, Hokkaido and Tokyo where two pairs of men and women are embroiled in a mysterious love story. Furukawa plays Ryo, a guy who lives in Tokyo and heads to Hokkaido to look for his girlfriend Yuri (Fujii) who had disappeared 100 days ago. During the journey, he bumps into a magician Ryu (also played by Furukawa) who looks exactly like him and another woman Aya (also played by Fujii) who looks like Yuri. This causes Ryo to be involved in a series of unimaginable incidents as he continues his search for Yuri.

During the event, Mr. Maric led the two actors to perform magic tricks with him live on stage which was greeted with loud applause from the audience. When it came to the talk section, Furukawa commented that it had been three years since they filmed the movie so they were especially happy to see that it was finally released. He recounted how the filming was the toughest for him in his career to date and even had to enter ice water to perform an escape magic trick. However, for what he had to go through, this movie was especially memorable for him as he starred in the leading role so he hoped that more people would be able to watch this. As this movie is a joint production between Japan and South Korea, the love story feel would come across as somewhat different so the audience might feel as if they are watching a foreign movie.
As for Fujii who won the heroine's role after an audition involving 10,000 people, she said that she was so bent on securing a role in the director's movie and was so engrossed during the audition. Now that the movie had been released, she was glad to be able to reveal this and expressed her wish that the movie's charms could be conveyed to the audience.