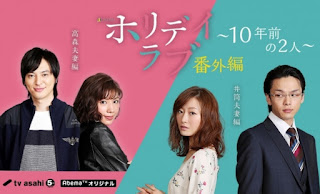 There will be a spin-off drama of TV Asahi Winter 2018 drama "Holiday Love" starring Naka Riisa which is currently showing at 11.15pm on Fridays. The spin-off drama titled "Holiday Love Bangaihen ~ 10 nen mae no futari ~" (Holiday Love Sub Edition ~ The two of them 10 years ago) will consist of two stories i.e. the Takamori couple and the Izutsu couple versions which will be shown exclusively via AbemaTV from 11.55pm on 4 March and 11 March respectively.

The original drama features Naka as the lead character Takamori Azu who is a 30-year-old nail artist living with her husband and child. Her peaceful life takes a sudden turn when she finds out about her husband Junpei (Tsukamoto Takashi) having an affair and is filled with anguish over his betrayal. However, Azu chooses to believe him and overcome their problems together so as to keep their marriage going. Things do not go as planned though as her husband's lover Izutsu Rina (Matsumoto Marika) who is married to a control freak husband Wataru (Nakamura Tomoya), keeps thwarting her efforts with various traps laid around the unsuspecting Azu so this process would be fraught with danger as she realises the meaning of what it means to be a partner in a marriage and tries to save her marriage.

In the spin-off drama, the timeline will be brought back to 10 years ago where the two couples were still in much happier times. In the Takamori couple version, it will depict the heart-throbbing moment of how Azu and Junpei met at a cafe they frequented and how they became lovers and got married. Back then, Azu had fallen for Junpei as she saw him often at the cafe but was unable to talk to him because of her boss Nishimura (Tawaragi Touta) who didn't know her intentions and unintentionally became a stumbling block between them. When Azu heard that Junpei was about to be posted to overseas, she was very shocked. On the other hand, Junpei was actually also in love with Azu and regretted not being able to speak to her.

On the other hand, the Izutsu couple version has a slightly dark tinge which describes not only how Wataru and Rina got together but also how Rina had snatched Wataru with her scheming ways from her colleague Sayuri (Shimizu Hazuki) who was secretly in love with him for 6 years since their university days. When they arrange to meet at a cafe, Rina who used to be Sayuri's junior when they were working part-time, arrived unexpectedly and took the initiative to approach Wataru thus making Sayuri panic. One month later, Sayuri was shocked to see Wataru and Rina appearing at the cafe together and behaving intimately.