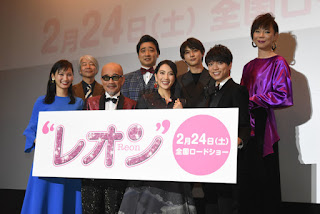 The completion screening event of new movie "Reon" was held at T Joy PRINCE Shinagawa on 24 January which was attended by the director Tsukamoto Renpei and cast members Jiyoung, Takenaka Naoto, Yamazaki Ikusaburo, Oomasa Aya, Yoshizawa Ryo, Saito Shinji and Mitz Mangrove. The movie will be shown in cinemas from 24 February.

The story is based on the same-titled manga by Ookura Kaori and Kiyoshi Tomohide which is serialised in smartphone magazine "Hot-Dog PRESS" and features Jiyoung as Takanashi Reon, a plain OL who had been dumped by her boyfriend and fired by her company. She then works as a dispatch employee at Asahina Foods which is a longstanding foodstuff company with a history of 30 years. Starring opposite her will be Takenaka who plays Asahina Reo, the autocratic president of the company who is capable at work but a lecher. Due to an unforeseen traffic accident, their souls switch bodies which lead to a series of hilarious situations. Reo starts to relish in becoming a beautiful woman and uses Reon's looks to become a cabaret hostess where he stumbles upon a plot to overthrow and chase him out of the company hatched by his nephew Masao (Saito) and Kusaka, Reon's ex-boyfriend (Yamazaki).


Jiyoung commented that although she had acted in a drama before where her character switched souls with another person, it was difficult having to play a lecherous company president this time. Despite so, Takenaka was full of praise for her especially with regard to her powerful performance and fluency in Japanese. Yamazaki then revealed that Jiyoung kept laughing when he was acting in the second half of the movie even though he was supposed to be playing a suave playboy while Yoshizawa whose character falls for Reon without knowing that her soul had been swopped, said that there was a scene where he had to whisper sweet nothings to Takenaka who was dressed in drag and he actually felt nervous about it because Takenaka had managed to make expressions just like a girl.

In line with the theme of the movie, the cast members were asked who they would like to switch bodies with for one day. Takenaka chose Saito so that he could experience how it felt to be walking down the streets with his face. Jiyoung chose Yamazaki since their birthdays are the same i.e. 18 January and they are like siblings. As for Yoshizawa, he wanted to become Yamazaki for once because he seemed to be having so much fun playing Kusaka and had such good vocals and could dance well. As for Mangrove, she chose Yoshizawa since he's the youngest guy in the cast which led Yamazaki to protest jokingly. When the host wanted to end the discussion, Saito quickly commented that he would want to become Yoshizawa so that he could see how his life would change if he had such good looks.

At the end of the event, Jiyoung said that even though she was nervous about being the lead in a full-length movie for the first time, she managed to have a very enjoyable filming thanks to the support of her co-stars and staff. Takenaka then cheered Jiyoung on and said that she was the best.