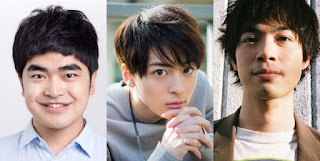 Takasugi Mahiro, Kato Ryo and Watanabe Daichi will be starring in the new real-life adaptation movie "Gangs" based on the same titled manga by Hiya Keisuke and Suzuki Daisuke serialised between 2013 and 2017 which will be directed by Irie Yu. The story describes how three young men Saike (Takasugi), Kazuki (Kato) and Takeo (Watanabe) who were together in a reformatory, come together to steal from criminal groups for their survival. Saike collects information about the criminals and plans the trio's strategy while Kazuki is bent on finding his long lost younger sister and Takeo is in charge of arranging cars for the trio. The movie will be shot from 20 January to late February in Kisarazu City, Chiba and other parts of the Kanto region and be released in cinemas in autumn 2018.


Takasugi commented that he was worried about how to play a guy who is homeless, has no insurance and nobody to depend on in the world and hoped to act as realistically as possible. As for Kato, he heard from the original manga's author Suzuki about the people who the characters were based on and felt that they were not as different from most people as he had imagined so he hoped that the audience would be able to feel the same way after watching this movie. As for Watanabe, he said that he was touched by how these men at the fringe of society managed to survive on their own terms and pledged to work hard to convey these feelings to the audience.