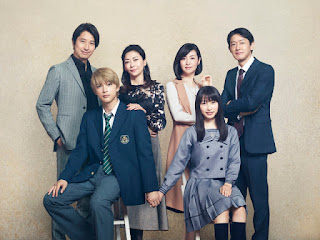 Nakayama Miho, Dan Rei, Tanihara Shosuke and Tsutsui Michitaka will be appearing in the new movie "Marmalade Boy" starring Sakurai Hinako and Yoshizawa Ryo. This will be the first time that the four of them are working together.

The movie which is based on the same-titled manga by Yoshizumi Wataru, features Sakurai as a senior high school student Koishikawa Mitsuki who is told by her parents that they are divorcing and planning to remarry by switching partners with the Matsuuras who they met during a trip in Hawaii. While still coping with the shock of this sudden development, Mitsuki finds that she has to live with the two newly-formed couples and the Matsuuras' only son Yuu (Yoshizawa) under the same roof. Although Yuu behaves coldly towards Mitsuki initially, the two of them gradually fall in love with each other.

Nakayama said that even though this is the first time they are working together, they actually know one another so it's a different feeling from working with someone you don't know. In addition, it is fun to be playing the two sets of parents who have a funky feel. Dan who revealed that she has been a fan of the manga since it came out more than 20 years ago, said that she never expected to be able to act in its adaptation movie so she was shocked when she got the offer. Meanwhile, Tanihara said that despite this being their first collaboration, the four of them felt like pieces to a puzzle which fit perfectly. However, his only "grouse" was that he wanted to act in such a romance story when he was younger but never expected to be able to do it only now and playing a father. Tsutsui echoed his view and said that although he had acted in many romance stories to date, this is the first time he is doing it from a parent's perspective.

The movie will be shown in cinemas from 27 April.