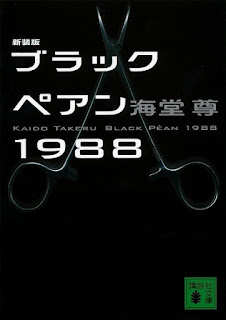 Arashi's Ninomiya Kazunari will be starring in the new TBS Spring 2018 drama "Black Pean" as a surgeon for the first time and his first appearance in a TBS in 10 years since "Ryuusei no Kizuna". This drama which is based on the novel "Black Pean 1988" by Kaidou Takeru, is the origin of the hit novel series "Team Batista no Eikou". The story describes how the lead character tries to uphold the pride of surgeons amid a trend of using surgical equipment which are aimed to replace surgeons and how he tries to survive in the world of conspiracy and jealousy in the university hospital. Behind the movement to introduce the new technology also lies a hidden past of wrongdoing. The drama begins its run from April 2018 in the Sundays 9pm timeslot.

Ninomiya plays the lead character Tokai Seishirou who is a proud and aloof surgeon known for his great stitching techniques and boasts of a 100% success rate. He is cynical and doesn't get along with the people around him thus is regarded as the devil of the operating theatre and seen as a nuisance. Although he works in an university hospital named Tojo, he has no interest in climbing up the hierarchy and is still a low-ranking doctor despite his experience. Just then, a new doctor from another university tries to implement new surgical equipment with the intention of replacing the surgeons who will be rendered useless. Tokai who objects to the move and the motive behind it, finds himself in an uphill battle against the research lab in the hospital, the pharmaceutical companies, medical equipment manufacturers and the Ministry of Health, Labour and Welfare which are trying to cover up a huge conspiracy.

In order to prepare for this role, Ninomiya got to observe a heart operation recently and learnt from the consulting doctor. He recalled how nervous he was to see this for the first time. Although Tokai may be seen as a dark hero, Ninomiya commented that he thought otherwise and would try his best to portray this character who people cannot read his mind.