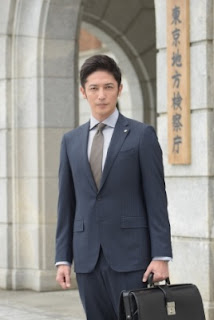 Tamaki Hiroshi will be starring in the TV Tokyo drama SP "Kyoaku wa nemurasenai Tokusou Kenji no gyakushuu" (Great evil does not go to sleep The counterattack of the special investigation unit prosecutor) which is part of the special project to commemorate the TV station's move to Roppongi. This is the first leading role in a private network drama for Tamaki after he acted in the NHK morning drama "Asa ga kita". The drama SP is based on the novel titled "Baikoku" (Treason) written by Mayama Jin and is the first work from him to be made into a private network drama. The drama SP will be directed by Wakamatsu Setsuro while the script is written by Kaneko Arisa.

Tamaki plays the role of Tominaga Shinichi who is a public prosecutor new at the special investigation unit who takes part in an investigation involving a big-name politician's illegal donations case. With the sudden disappearance of his childhood friend, Tominaga also gets embroiled in a scandal involving a space exploration project. As he investigates further, he finds that both cases are related to the politician who he has been checking on. At the same time, a young researcher at JAXA named Hattanda Haruka who has to struggle with the conflicts between dreams and justice.

Tamaki recounted that when he first read the script, he thought that this is a very challenging drama. As this drama is presented by highlighting evil, this will get viewers to think of what justice really means. In addition, as Tominaga is a new member of the special investigation unit despite being experienced and already in his mid 30s, Tamaki thinks that it's important to show this side of his character.

The rest of the cast will be announced at a later date and the drama SP will be shown within 2016.

Awesome news, thanks Chiaki! I've been wondering if he'd do a new drama or something, so this is great. His character sounds interesting already. Still waiting for him to get a role in a WOWOW production, though.