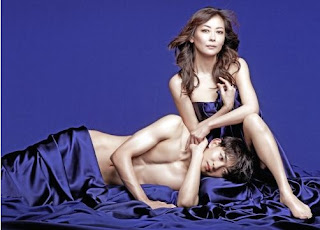 Nakayama Miho will be starring in the new WOWOW drama "Kenja no Ai" (The Sage's Love) which will begin its run from 20 August in the Saturdays 10pm timeslot. The drama which consists of 4 episodes, is based on the same-titled novel by Yamada Amy which was a homage paid to Tanizaki Junichiro's "Chijin no Ai". This is the first time that she is playing a baddie role in her acting career.

Nakayma plays the lead character Takanaka Mayuko who is an editor and was betrayed by her first love Ryoichi (Tanabe Seiichi) and best friend Yuri (Takaoka Saki) 20 years ago. After Ryoichi and Yuri got married and gave birth to their son, they got Mayuko to name the baby who chose the name Naomi who is the lead character in "Chijin no Ai". Unknown to the couple, Mayuko plots a long-running revenge against them by cultivating Naomi (Ryusei Ryo) into the type of man she likes and makes the latter so emotionally attached to her that he cannot give her up. Once Naomi reaches the age of 20, the two develop a physical relationship despite the fact the he is 25 years younger than her. Mayuko's parents will be played by Enoki Takaaki and Asaka Mayumi.

Sources: Nikkansports / Sanspo / Yomiuri Hochi
Posted by Chiaki at 11:50 AM