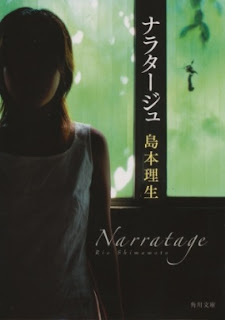 Matsumoto Jun and Arimura Kasumi will be working together in the new movie "Narratage" which is due to be shown in autumn next year. The movie which will be directed by Yukisada Isao, is based on the same-titled novel written by Shimamoto Rio in 2005 when she was just 20 which was one of the nominees for the 18th Yamamoto Shugoro Award and sold 350,000 copies to date. The title of the novel refers to the acting technique of having one character in the role of storyteller or the act of inserting bits of explanation into a narrative and in this case, the story is told by the heroine played by Arimura as she reflects on her character's senior high school days. Filming which is largely done in Toyama, began in early July and expected to be wrapped by mid August.

Matsumoto plays the role of a senior high school teacher Hayama Takashi while Arimura plays his student Kudo Izumi. Due to their relationship, Izumi had to suppress her feelings for Hayama although she had been holding a torch for him. Years later when Izumi is an university student, she is asked to go back to the acting club of her senior high school to help out and reunites with Hayama which marks the beginning of their forbidden romance. Although Matsumoto and Arimura had worked together in the drama "Shitsuren Chocolatier" before as siblings, this is the first time that they are collaborating in a movie where they will have to take on intimate scenes.

Yukisada said that since he read the novel 10 years ago, he has been eager to adapt it into a movie. As such, he is happy to be able to get Matsumoto and Arimura to play the lead characters who are wavering in love and hopes to make this film into a signature romance movie. Matsumoto commented that although people may have different feelings and approaches regarding love, he believes that the moment when people's hearts are moved by others is something which everyone can identify with so he hopes to present the heart-wrenching love story to the audience with his co-star. As for Arimura, she believes that it will be an exciting experience for her this summer as she is filming in a new place and hopes to be able to convey the wholehearted love a woman feels for a man through this movie.