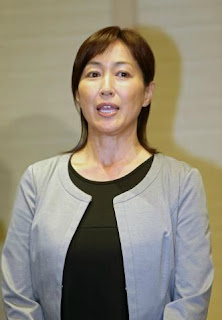 Takashima Reiko held a press conference on 30 June at Kyoto City in response to her husband Takachi Noboru's arrest for possession of drugs on 24 June where she apologised for the inconvenience and worry caused by this. The press conference began 20 minutes later than scheduled and Takashima began by thanking the media for coming and apologised for not being able to speak to them directly until now. This was partly because she had to be questioned by the authorities and go through an urine test herself as part of the investigations. Results of the test will be out at a later date. In addition, when news of the case first broke, she was in a state of shock and wanted to get the details of the case first before speaking publicly on the issue. Takashima has been in Kyoto recently for the filming of her new TV Tokyo drama "Onnatachi no Tokusou Saizensen" which is due to begin its run from 21 July.

Takashima revealed that she thought at first that Takachi's arrest was a joke and reality only sunk in much later. She stated that she had no idea about her husband's drug consumption. Nonetheless, since she is living together with her husband, she had to be questioned and subjected to an urine test. When asked if she noticed signs of her husband displaying unusual behaviour typical of drug users such as excessive sweating or extreme mood swings, Takashima revealed that both Takachi and her sweat a lot so it wasn't anything to worry about. Besides, Takachi has always been a very emotional person who expresses openly how he feels thus she didn't sense anything amiss.

While holding back tears, Takashima revealed that she will not rule out divorce in future but that's dependent on how Takachi behaves in future. She admitted that not having noticed or detected her husband's drug consumption habit was something she wasn't really proud of but she is prepared to see how he turns over a new leaf in future and hopes that he will change his ways. However, she cannot ignore the negative impact that this matter has caused to her or the people around them so she has to think about divorce as a possibility. When asked if she regretted getting married, Takashima said that she had decided to get married on her own will and that the couple had their fair share of quarrels before marriage. However, things got better after they got married so she wasn't regretting her decision then.

As for the woman who Takachi was arrested with, Takashima admitted that she had met the woman once about 10 years ago when the latter was introduced to her as a friend. However, she had no knowledge of her husband's relationship with the woman and was really saddened by their alleged affair. However, she tried to put on a brave front and said that there are more important things for her to do now so she will not wallow in self pity over this.

At the end of the press conference, Takashima expressed her thanks to the people who have been showering her with encouraging words and promised to work hard so as to repay them for the support they've shown for her.