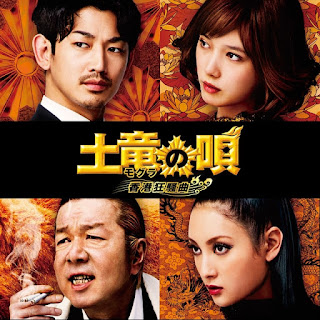 The cast lineup for new movie "Mogura no Uta Hong Kong Kyousoukyoku" starring Ikuta Toma was announced on 18 July. The movie which is based on the same-titled manga by Takahashi Noboru and will be shown in cinemas from 23 December, features Ikuta as an undercover police officer Kikukawa Reiji who will be investigating a case in Hong Kong this time. The first movie released in February 2014 achieved box office sales of 2.2 billion yen. As for the sequel, it will be directed again by Miike Takashi and written by Kudo Kankuro. Filming was completed on 17 June.

In the cast lineup, Eita will be playing an elite police officer who doesn't know Reiji's true identity and treats him as an enemy. Reiji's investigation target who is the chairman of a gang will be played by Iwaki Koichi while his daughter is played by Honda Tsubasa. Nanao will play a Chinese mafia member who is out to kill Reiji. Tsutsumi Shinichi will play a gang leader who is impressed with Reiji and takes the latter as his sworn brother. Furuta Arata will be an expelled member of the gang who holds a grudge against Reiji and Tsutsumi's character while Kamiji Yusuke will play a killer belonging to the gang and Naka Riisa will be a police officer who has a thing for Reiji.