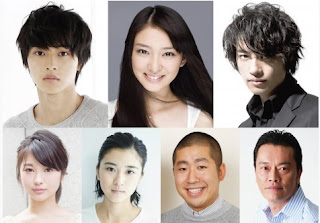 The third "Youkai Watch" movie titled "Eiga Youkai Watch Soratobu Kujira to Double Sekai no Daibouken Danyan" which is due to be shown from 17 December will be a hybrid one i.e. featuring both anime + real-life characters. In the cast lineup announced on 9 July, Yamazaki Kento, Saito Takumi, Takei Emi, Hamabe Minami, Kuroshima Yuina, Sawabe Yu and Endo Kenichi will be appearing in the movie as real-life characters to which they expressed surprise initially since they all thought that they were approached to be voice actors for the movie. However, details about their characters' names and how these characters fit into the story will only be made known at a later date. The lead character Keita will be played by 10-year-old child actor Minamide Ryoka.

The producer of this movie Hino Akihiro revealed that the idea to create such a hybrid movie was due to the intention to do something different this time and was conceptualised by their CG team. However, to ensure that the children who have been watching the anime version all this while would accept the new movie, they decided to do a hybrid between both genres rather than dive straight into a real-life adaptation. Hino also expressed his apology for making some of his cast members do weird actors in this movie even though they are in the league of leading actors and actresses.

Yamazaki commented that he is very happy to be taking part in such a popular movie and hopes that the audience will like both genres at the same time. On the other hand, Endo jokingly said that although he has a frightening face, his appearance time is limited so he thinks that the children won't be scared by him. Last but not least, Takei said that she has experienced the popularity of the Youkai Watch characters before since they collaborated in a CM in the past so she hopes that this movie will enjoy the same amount of support and that the viewers will enjoy watching this film.

Wahoo I love Youkai Watch but I feel that make it half real half anime will be REALLY strange.... A must watch for me anyway~