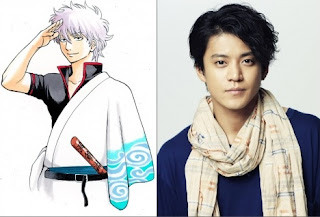 Oguri Shun will be starring in the real-life adaptation movie of popular "Shuukan Shounen Jump" manga "Gintama" which will be shown in cinemas next year and play the lead character Sakata Gintoki. The movie which will be written and directed by Fukuda Yuichi, is based on the manga by Sorachi Hideaki which has been serialised since 2004 and has sold more than 50 million copies to date and had an anime series and 2 anime movies released in 2010 and 2013 to date. Filming of this new movie begins in July and the cast lineup other than Oguri will be announced at a later date. Oguri has been a fan of the manga and also appears as a parody character Oguri Shunnosuke in the 27th volume of the manga.

The story is set in a parallel world at Edo where aliens from space called Amanto have conquered Earth. Oguri's character Sakata works as a freelancer who still believes in honouring the samurai spirit despite the waning influence of the samurais and the story talks about his adventures with his friends. The author Sorachi commented that when it comes to real-life movie adaptations like this, fans tend to have certain expectations over who plays which character and it is common for the actors to be criticised for not meeting those expectations. However, he believes that Gintama fans wouldn't change their impressions or views of the manga characters no matter who plays them in the real-life movie and said that the actors who signed on for this project are already prepared for any criticism that may come their way. As such, Sorachi is eagerly looking forward to a new type of Gintama through this movie and doesn't feel bothered about it being a possible box office flop if fans turn out not to like it after all.