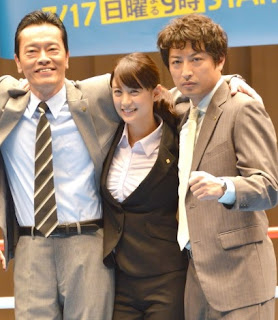 The farewell party event for FujiTV Summer 2016 drama "HOPE ~ Kitai Zero no Shinnyu Shain ~" was held at Gorakuen Hall on 5 July which was attended by cast members Hey! Say! JUMP's Nakajima Yuto, Endo Kenichi, Seto Koji, Yamamoto Mizuki, Kiriyama Akito and Yamauchi Takaya. The drama which begins its run from 17 July in the Sundays 9pm timeslot, features Nakajima as a young man who had aspired to become a professional Go player but failed and ends up working in a trading company with just senior high school qualifications. Due to his lack of knowledge and inability to interact well with others, he suffers various setbacks initially but gradually grows to become a salaryman who can be trusted by his colleagues. The drama is a Japanese adaptation of the popular South Korean manga "Misaeng" which was also made into a popular TV drama.

Endo commented that this drama will be very interesting to viewers and even declared that if most of them find it boring, he will quit as an actor. He also praised Nakajima for doing well in his acting that he cried a number of times while watching the first episode and said that this drama will become Nakajima's signature work. In response to the praise from his senior, Nakajima said that he is deeply humbled by this and hopes to become better in acting through this drama.

Seto and Nakajima who play rivals in the same department showed their close friendship when the latter revealed that Seto had asked out of the blue before the event if it was OK that he starts calling Nakajima by his first name rather than surname. This surprised Nakajima as this kind of words are usually spoken by couples who just started dating thus it led Kiriyama to tease them that they shouldn't be doing that since their "company" bans dating between colleagues.

Although there is no romance plot in this drama, Yamamoto who is the only actress in the cast, was asked by the event host who she would choose if the actors had all expressed their feelings for her. She declared that it will have to be Endo who jokingly said that at times like this, the middle-aged man stands to gain since the ladies wouldn't choose one of the younger guys.