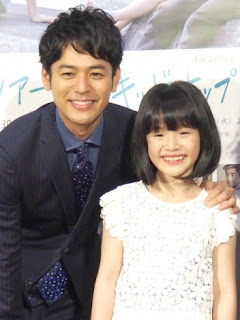 Tsumabuki Satoshi will be playing a father for the first time in the upcoming NHK drama SP "Kidnap Tour" which will be shown at 7.30pm on 2 August. The drama SP which is based on the novel by Kakuta Mitsuyo, features Tsumabuki as Takashi who is a penniless man living separately from his wife and daughter. In order to strike a "deal" with his wife Kyoko (Kinami Haruka), he goes on a trip with his daughter Haru (Toyoshima Hana) by "abducting" her. Through this trip, Takashi and Haru discover things they never knew about each other.

When asked about his first attempt at playing a father with a daughter in Primary 5, Tsumabuki commented that he thinks that he will be a father one day but to be able to experience now through this drama is a very amazing thing for him and the feelings a father would feel came rather naturally during the filming. On the other hand, Toyoshima admitted that she was expecting another actor or a comedian to play her father so she was surprised to hear that Tsumabuki was going to be her father in the drama and couldn't imagine him being like Takashi. However, once the filming got underway, she was impressed by how Tsumabuki blended into the role and thought that he did very well.

Co-stars include Kaho, Arai Hirofumi, Muro Tsuyoshi and Yachigusa Kaoru who play the people Takashi and Haru meet during their trip while Mitsushima Hikari plays Takashi's former girlfriend. In response to this, Tsumabuki said that he and Mitsushima have played siblings so many times but he is confident that they will look like a pair of ex-lovers this time.