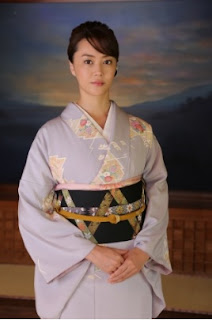 Mizuki Arisa will be starring in the NHK / BS Premium drama "Kakuregiku" which will begin its run from 4 September in the Sundays 10pm timeslot. This marks the renewal of her current record of starring in the lead roles of drama series for 25 consecutive years.

The drama which is based on the same-titled novel by the late Renjo Mikihiko that had won the 9th Shibata Renzaburo Award in 1996, features the turbulent life of Ueshima Michiko who becomes the manager of a ryotei beside Hamano Lake in Shizuoka Prefecture after being a housewife for 17 years and had to divorce her husband of 17 years. The previous female manager of the ryotei named Kiku will be played by Matsubara Chieko while Maekawa Yasuyuki will play Michiko's ex-husband and Ogawa Tamaki will play his lover. Tsutsui Michitaka will play the president of a construction company who has feelings for Michiko.