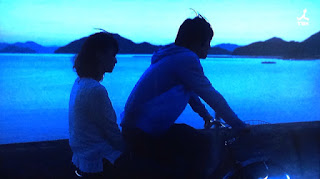 Hi everyone, to celebrate Dorama World's 10th anniversary coming up next month, I will be organising this game called "Guess the drama?". If you've been following the blog since the forum days, you would probably remember what this was. At that time, we had this relay game where people would post screenshots from dramas for the rest to guess the title. The winner would then have the right to set the next round's question.

This time, I am going to do it slightly differently. I will be the one setting all the questions this time. Besides screenshots, I intend to use other materials such as sound clips of the drama's BGM or theme song, snippets of signature lines in the drama or keywords which relate to a particular drama. As such, I hope that this makes the game more challenging and fun to play.

Here is how the game will work:

- I will post the current round's question on the blog every day from 31st July (Sunday) at 12 midnight GMT +8 and announce it via Dorama World's Twitter and Facebook pages as well. There may be multiple questions posted within a day so do check the blog, Twitter and Facebook to get the latest updates. I am planning to post at least one question per day.

- If you know the answer to the question i.e. the name of the drama, simply drop me a private message via Facebook or Twitter. I did think of using the comments section on the blog and the other two social media platforms but that will mean the answers of those who replied earlier can be seen by others. To be fair to all, I will be the only one to see the answers. For the names of the drama, I will only accept the names in Japanese rather than translated names e.g. if the answer is Boku no Yabai Tsuma, please do not send the answer as My Dangerous Wife. If there are slight variations due to lengthened vowels in the name, that's acceptable e.g. Akutou vs. Akuto but other typo errors won't be acknowledged as correct answers. Answers will be accepted from the time it is posted until the time when the next round's question is released.
In the event that you can't send your answers via Facebook or Twitter because you don't have an account, I can accept your answer on an exceptional basis through a comment on the blog post.

- At the end of the entire game i.e. 19 August being the last day, I will tabulate the total number of correct answers by each player. As such, it is important that I know at least your online nickname so that I can identify you.

- The top three winners will get a prize from me. Yes, you read this right, a small token of appreciation from me for your participation! What I intend to give will be official merchandise of dramas or movies in my collection. When I have the winners' names, I will contact them individually to find out which item they prefer before sending the prize to them by post. I hope that I'll have something which is to your liking though!

As a pre-game warm-up, the first question is from the photo in this post. If you know which drama this photo comes from, please drop me a message via Facebook or Twitter from now until 11.59pm on 30th July. Looking forward to your entries and have fun!
Posted by Chiaki at 11:02 PM

Hi himitsu-17, if you don't mind, you can leave a comment on the blog post and I'll accept your answer through here instead.

This sounds like fun! I have no clue about the first screenshot, but I hope many people participate!

Hi junny, it's OK if you have no answer for this trial round. Looking forward to seeing your answers when the game starts!

Looks fun! the dramas are ranging from what year to what year? so each time there will be only one hint? either only screenshot or only BGM/OST or only keyword?
Seems challenging, can't wait to participate!

It will be a mix of old and new dramas so there is no date range set for this game. Each round will have one clue or hint only. If it's proving to be so difficult that nobody gets that round correct, I may release another clue.

Note that you will need to participate in this game using the methods I outlined in the post so that I can identify the players and subsequent winners thus please do not use the "anonymous" setting. Looking forward to your participation!

Congratulation for decade of personal blog.That not easy for maintain your property at this present.

Thank you, that's really REALLY nice of you :)
I think this picture is from N no tame ni :)

Please delete my message if you feel like it's better to keep it hided :)

Hi himitsu-17, there is no function to hide the comment but you can continue using this method to submit your answer since you can't use the other two methods. Good luck when the game starts!