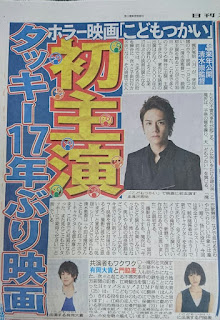 Takizawa Hideaki will be starring in the new horror movie "Kodomotsukai" (The Child Manipulator" directed by Shimizu Takashi which will be shown in 2017. This is Takizawa's first leading role in a movie since he appeared in the 2000 movie "Kawa no nagare no you ni". Filming begins on 1 July.

The movie which is based on an original script, features Takizawa as a mysterious man who manipulates the spirits of children by entering into their hearts and taking control of their spirits. Three days after the children disappear, they will cause the mysterious deaths of the adults who meet them. Takizawa will have to put on special makeup for this character. Co-stars include Hey! Say! JUMP member Arioka Daiki who plays a news reporter trying to investigate the truth and Kadowaki Mugi who plays his girlfriend and is being manipulated by Takizawa's character.

Takizawa commented that as this is the first time he is attempting a horror movie, he is eagerly looking forward to acting in this role. Although the movie is quite scary, there are also humourous elements in it so he is hoping that this will be a new type of horror movie which can be presented to the audience.

Dai-chan *-* I don't like horror movies, but just for him I'll watch this movie :) He's not much on movies/dramas so it's too important to miss ~

Thanks for this news ;)

Takki has a new drama this summer with Takei Emi so you might want to check that out as well. ^__^