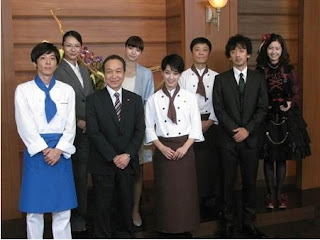 The production press conference of TV Asahi Summer 2016 drama "Gurame! ~ Souri no Ryoriban ~" was held on 19 July which was attended by cast members Gouriki Ayame, Kohinata Fumio, Takito Kenichi, Takahashi Issei, Matsuo Yukimi, Shinkawa Yua, Miyake Hiroki and Naito Risa. The drama which begins its run from 22 July in the Fridays 11.15pm timeslot, features Gouriki playing a chef for the first time so she showed off the results of her training in the last month by serving the special Gurame! chicken plate which consisted of chicken saute, burdock salad and cold potato potage. In response to that, Kohinata who plays the prime minister in the drama praised her for the food and said that he was pleased to be able to taste her cooking before her future husband does. As Gouriki has to cook various dishes in the drama, there is a lot of time spent on preparing the food for those scenes. This also makes her feel hungry often due to the aroma of the dishes. Despite the training, Gouriki admitted that she is still far from being a good cook but has become better than when she first started learning.

On the other hand, Kohinata jokingly commented that although he and the current Prime Minister Abe Shinzo are of the same age, the latter has more hair on his head than him and he hopes that people won't mistake him for Higashikokubara Hideo who sports a similar hairstyle.