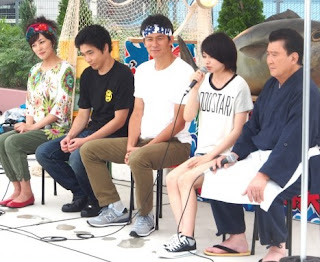 The production press conference of TV Tokyo Summer 2016 drama "Yassan ~ Tsukiji Hatsu! Oishii Jikenbo ~" was held at the outdoor rooftop of new Tsukiji facility Uogashi on 13 July which was attended by cast members Ihara Tsuyoshi, Emoto Tasuku, Itaya Yuka, Yamamoto Maika and Satomi Kotaro. The drama which begins its run from 22 July, features Ihara as the lead character Yassan who has no money and place to live but has a strong love for food and teams up with fellow homeless and unemployed Takao (Emoto) to solve cases in the Tsukiji market.

Ihara revealed that he had not been working for the last three months before filming started and went on a diet to reduce his weight from 84.5kg to 76kg. In order to build up his muscles, he will be drinking protein beverages from now on along with his daily exercises of running, weight training and push-ups. During the filming, Ihara does not need to wear make-up and is always dressed in a T-shirt so he's very happy about this since there is little preparation time needed before filming which is done mainly at Tsukiji Market which is due to move in November.

Satomi revealed that he had worked in Tsukiji about 60 years ago so if he had not become an actor, he would have inherited his relative's shop and be troubled over the move to Toyosu by now. As for Emoto, his younger brother Tokio is also starring in a TV Tokyo Summer 2016 drama "Otokomeshi" which is about food too and revealed that they are on good terms and meet up often. As both dramas are shown on the same day, Emoto called upon viewers to watch both dramas so as to support them.