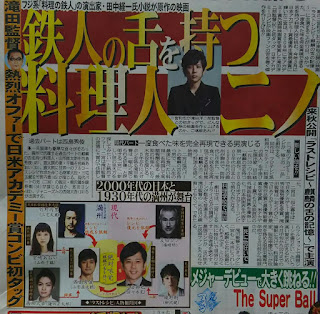 Ninomiya Kazunari will be starring in the new movie "Last Recipe ~ Kirin no shita no kioku ~" (Last Recipe ~ The memories of the kirin's tongue~) which will be shown in autumn 2017. The movie which will be directed by Takita Yojiro, is based on the novel "Kirin no shita wo motsu otoko" (The man who has the kirin's tongue) by Tanaka Keiichi who is the director of FujiTV's cooking variety show "Ryori no Tetsujin".

The story is set in Manchuria during the 1930s and Japan during the 2000s where there are two men reputed to have the kirin's tongue i.e. someone with the perfect sense of taste who can recreate dishes by tasting them just once. Ninomiya plays the role of Sasaki Mitsuru who lives in the current era where he charges an exorbitant amount to recreate dishes for people who wants to eat something for the last time in their lives. In order to cope with the numerous cooking scenes in the movie which the director wants him to do personally rather than use stand-ins, Ninomiya has started taking cooking lessons from food critic Hattori Yukio's cooking school from mid July until filming starts in October. Although Ninomiya is left-handed, he has to learn how to use the knife with his right hand instead.

In the Manchuria part of the story, Nishijima Hidetoshi will take on the role of Yamagata Naotaro who also has the kirin's tongue while his wife Chizuru is to be played by Miyazaki Aoi. Takenouchi Yutaka will play Miyake Taizo, an army colonel who orders Naotaro to create the best full course meal for him which consists of 112 dishes. During the war, the recipes go missing. To recreate these legendary dishes, Mitsuru is engaged for the task so the movie will shuttle between the past and present repeatedly. In the current era, Mitsuru's buddy Yanagisawa Ken will be played by Ayano Go. Co-stars also include Oida Yoshi and Johnny's Jr Nishihata Daigo.