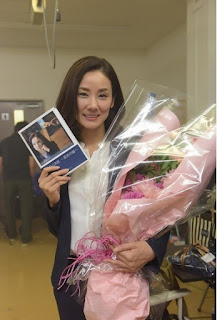 Yoshida Yo wrapped up the filming for the WOWOW Autumn 2016 drama "Cold Case Shinjitsu no Tobira" on 4 July after working on it for the last four months. This is her first leading role in a drama and she plays Ishikawa Yuri, a capable police detective who works in the cold case team to crack unresolved cases. The Japanese drama version is a remake of the hit series from the US shown on CBS which has lasted 7 seasons to date.

Yoshida commented that if possible, she would like to continue working on this drama and regards this as a lifelong project for her. Reflecting on the filming period, Yoshida who was presented with messages and flowers from the staff and cast members, said that this is the first time where she is feeling so sad about the end of filming. The feeling of her being the lead still hasn't sunk in even though the filming has been completed. Nonetheless, she was very grateful for the chance to be regarded as an actress good enough to take on this role and had come this far with the her help of the cast and staff who helped to make the atmosphere on set very comfortable for her.

Yoshida also said that this time, she feels that the boundary between her true self and Ishikawa Yuri has become so blurred because she has blended into the role so much. She doesn't know if she will come across a character like this in future so she greatly treasures the experience this time.